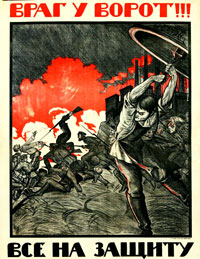 The president of Russia Vladimir Putin warned FSB that «foes behind a hillock» already prepare for autumn elections in Russia. He told about it on board of service:

«I read your [FSB] documents which regularly prepare — and in a generalized view, and concrete instructions that, unfortunately, our foes behind a hillock also prepare for these elections as at us in the people speak. Therefore all have to know that we will work on protection of our interests persistently, according to our law (the quote on TASS).

The head of state noted that attempts of external intervention in the course of autumn elections in Russia will be considered as direct threat to the sovereignty. He set the task for FSB: «To make everything to stop activity of those who will try or can try to use the nationalist, xenophobic, radical slogans directed on split of our society». «Of course, it is necessary to stop any external attempts of intervention in the course of elections, in our internal political life» — Putin emphasized. He added that «similar technologies exist and were more than once used in a number of the countries» and are direct threat to the sovereignty. «We will react to it as appropriate» — the president declared. (RBC in more detail)

So, the next time Putin disappoints with stagnancy of the thinking and a banality of speeches. After all the policy of search of the external enemy is not new — all know that it is one of the easiest and effective ways to rally the nation and to distract it from internal problems of the state.

Using expression «our foes behind a hillock», Putin tries to kill two hares:

In this case Putin uses idle time and effective reception of promotion — «creation of associations». The art metaphor creates in imagination heard this phrase a colourful image which long interferes with common sense and logical thinking. To overpersuade people into which heads the simple and attractive false metaphor is hammered, happens very difficult.

After similar speeches and there is a wish to sing:

Whirlwinds hostile blow over us,
Powers of darkness spitefully oppress us.
Fatal we engaged with enemies,
Still destinies unknown wait for us.

And then to run in the next military registration and enlistment office with shouts «The enemy at gate!» and the requirement urgently to employ me under the contract…