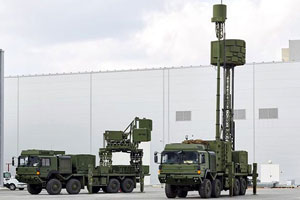 It said it indigenously developed and produced the KORAL, a transportable system with jamming and deception capabilities that can paralyze hostile radars.

The system features a capability to analyse multi-target signals and automatically or manually generate an appropriate response.

KORAL Radar ES System has a modular design with a multi receiver architecture. Its wide frequency and spatial coverage, coupled with high parameter measurement accuracy (RF, PRI, PW, DOA) allow to handle both traditional and emerging threats with an automatic identification of threats and a fast system response.

The KORAL Radar EA system has multiple jamming and deception techniques and can handle both traditional and emerging threats with an automatic identification of threats and a fast system response. KORAL Radar EA System also feature a modular design, an integrated digital receiver, a technique generator and a digital RF memory architecture.

The two vehicles are based on a 8×8 truck military chassis from the German Company MAN.

KORAL System is operated by two operators within the Operation Control Unit (OCU) and a Supervisor. OCU is in compliance with NATO standards and also supports NBC protection. KORAL System also provides Mission Planning and Mission Analysis Tools as an option. The system is able to operate within a dense and CW environment with a high precision direction finding and a high precision position fixing with multi-platforms. With an effective range in excess of ninety miles (about 150 kilometers), KORAL reportedly could jam and deceive any land, sea and airborne radar systems. The fast beam steering is generated via the phased array antenna system with a high output of power and multiple solid state amplifiers. The system covers a wide frequency and spatial coverage with a high parameter measurement accuracy. The KORAL system can operate at temperature between -30 °C and +50 °C and with a humidity rate of 95 %.