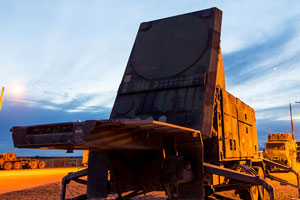 Raytheon’s bet on a new radar for its Patriot air and missile defense system is now fully functional and ready for its public debut. Raytheon executives took a few reporters on a tour of the company’s Integrated Air Defense Center, where they build Patriot systems and the radar technology they pitched as the future of air and missile defense: Gallium Nitride (GaN) Active Electronically Scanned Array (AESA) radar. The facility houses a foundry for GaN and its predecessor Gallium Arsenide.

It’s a sizable bet. Raytheon has invested over $100 million over three years to develop the GaN AESA radar, augmented with US government investment over time.

The Patriot system was fielded to the Army in 1982 and Raytheon has continuously upgraded the system with investments from the US and 13 partner nations. The system is expected to stay fielded until at least 2040. But Raytheon has not been able to rest on its laurels. Lockheed Martin developed a competing air and missile defense system called the Medium Extended Air Defense System (MEADS) and is directly competing with Raytheon stateside and abroad for future deals.

Patriot radars currently use Gallium Arsenide (GaAs), a semiconductor material. Raytheon believes GaN will bring exponentially more capability to the Patriot system and double the system’s reliability. Moving to a GaN radar also frees up space in the system to add redundancy, or future capability like the Integrated Battle Command System, the command and control for the Army’s future air and missile defense system.

The US Army and several foreign countries appear to be ready to take the next steps when it comes to bringing on new capability in air and missile defense. The Army is funded in fiscal year 2017 to hold a competition for an IAMD radar. It hasn’t publicly laid out requirements or how it might conduct a competition.

Japan, Spain and Greece are looking into upgrading their Patriot systems while Sweden, Romania, Czech Republic and Finland are potential new customers in addition to Poland and Turkey.

Poland announced in the spring of 2015 that it had picked Raytheon’s Patriot system for its new air and missile defense program called Wisla. Lockheed was in the running but the government excluded it from the competition because MEADS was not yet a fielded system. Poland and the US government began negotiations to purchase Patriot, but a Polish presidential election that ousted those in office when Patriot was picked has created uncertainty over the program’s future there. The Polish Ministry of Defense has re-initiated discussions with the MEADS team.

Turkey is also weighing its options after dropping an earlier decision to acquire the country’s first long-range air- and anti-missile defense system from a Chinese contractor. Both Patriot and MEADS are back on the table there.

While it appears that Germany will develop the MEADS system, Ralph Acaba, the company’s vice president of Integrated Air and Missile Defense, said the country is serious about upgrading the Patriot systems it already has in its inventory. Germany has said it plans to keep its Patriot systems until at least 2030 while it develops its next-generation system.

The Patriot Configuration 3+ is the latest version of the system. It includes a new radar digital processor, the «Modern Man» control station considered more comfortable for the operators, and a modern adjunct processor.

Acaba said he expected Germany to make Patriot upgrade awards in the fiscal 2017 or fiscal 2018 timeframe.