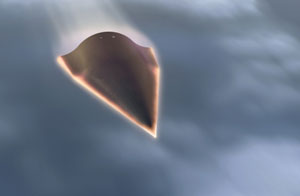 Hypersonic flight is defined as anything about Mach 5, meaning five times the speed of sound or 3,600 miles per hour. To put it into perspective, a jet flying at hypersonic speeds could cross the continental United States in about half an hour.

Although it is extremely difficult to reach and maintain such speeds due to extreme temperatures and thermal loadings, the US has had the ability to build boost glide and boost cruise weapons for six decades. NASA’s X-15 effort in the 1960s was able to achieve speeds of Mach 5, and in 2013 the Air Force’s X-51 Waverider air vehicle, launched from a B-52 bomber, reached Mach 5.1 at 60,000 feet.

But developing a hypersonic weapon is expensive and technologically challenging, and in recent decades the Pentagon has chosen to invest in more traditional ways to take out the threat. However, as adversaries like Russia and China develop surface-to-air missiles and anti-aircraft weapons designed to foil US forces’ ability to penetrate, Pentagon leaders are pushing hypersonics as a means to counter this “anti-access area denial,” or A2/AD, environment.

The speed of hypersonic weapons allows development of better targeting solutions, enabling commanders more opportunity to assess targets correctly and accurately and then act, Richard Hallion and retired Maj. Gen Curtis Bedke wrote in a January report by the Mitchell Institute. Hypersonics also solves the distance problem of an A2/AD environment, as a Mach 5 weapon could be launched outside the “threat rings” of modern SAMs and fighter aircraft and still reach the target in time.

Lockheed has previously supported work on hypersonics. In 2011, a joint Lockheed-Defense Advanced Research Projects Agency effort tested HTV-2, a hypersonic vehicle designed to travel at Mach 20. But the friction and heat burned through the test vehicle’s outer shelf, and it crashed into the Pacific Ocean.

Based on lessons learned from HTV-2, Lockheed is currently supporting two new customer efforts in hypersonics:

“The technology could also enable hypersonic passenger flights, and, even easier, access to space,” Hewson said. “I am confident that Lockheed Martin has the technical expertise to make it happen.”