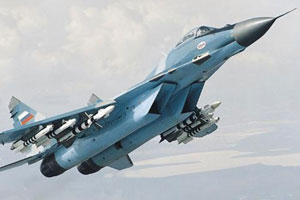 Russian Aircraft Corporation has announced the sale of 50 MiG-29 M/M2 fighter jets to a North African country, which was not named for customer confidentiality reasons.

In May 2015, Russian business daily Vedomosti reported that Egypt wanted to acquire at least 46 MiG 29 fighter jets as part of the US$3 billion arms deal signed with Russia during President Abdel Fatah El Sisi’s visit to Moscow a month earlier.

The new fleet of advanced MiG 29s will likely replace an ageing fleet of Soviet-era MiG-21 and Chinese-made J-7 Thunder fighter jets which are still serving the Egyptian Air Force.

The two helicopters are believed to have been delivered to Algeria late in November last year but their arrival was only confirmed last week.

Main technical and technological innovations applied on the MiG-29M/M2 fighters are as follows:

The MiG-29M/M2 fighters belong to the new unified combat aircraft family designed on the basis of MiG-29K/KUB carrier-based fighters.

The power plant includes RD-33MK engines with increased thrust power, equipped with smokeless combustion chamber and new electronic control system (of FADEC type). Engines are of the module structure and have increased reliability and service life.

The airborne avionics is of the open architecture based on MIL-STD-1553B standard that allows the installation on aircraft of new equipment and weapons of Russian and foreign origin upon customer request.

The fighter has multi-role, multi-mode «pulse-Doppler» type radar «Zhuk-ME» manufactured by «Fazotron-NIIP» Corporation. The radar is provided with the slot array. As compared with radars of the previous generation, «Zhuk-ME» has wider scanning angle in azimuth, twice longer target detection range, less weight and increased reliability. «Zhuk-ME» provides tracking up to 10 air targets with four targets simultaneous firing with missiles.

The MiG-29M/M2 fighters are equipped with state-of-the-art multi-channel IRST with target designation system to the anti-radar passive war-head missiles.

There is the possibility of installation on aircraft of IR and laser sighting equipment pods for ground targets illumination.

Weapons system includes «A-A», «A-S» missiles, guided aerial bombs, rockets, aerial bombs and built-in air-gun of 30 mm caliber. Upon request of the customer the new types of weapons can be applied. The MiG-29M/M2 fighters weapons allow to destruct air targets as well as the movable and stationary ground/surface targets.

Both the single and double seat versions of aircraft have the same airborne equipment and weapons as well as the high unification level of structure.

For the MiG-29M/M2 fighters the full set of training means was developed.