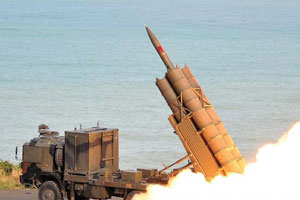 In the early 1980s, Turkish Land Forces Command showed interest in long range rocket system to supplement its artillery units and counter the long range MBRL and mechanized threat faced by Turkey from Soviet Union and other neighboring countries. After the lengthy evaluation process of different designs, LTV-made MLRS (Multiple Launch Rocket System) was selected and an initial deal was signed in late 1987, this deal was covering the joint production of 180 M-70 MLRS launcher systems and more than 60,000 rockets. For the production, a Joint Venture was founded by LTV and Turkish companies in 1988. Turkey later decided that industrial benefits and amount of transfer of technology from this deal were nominal and not adequate. It was assessed that this project does not help Turkey to achieve its long term goals in rocket and missile technology. So deal to co-produce the M-70 MLRS was canceled. After the decision to cancel the initial agreement, to meet the urgent requirements of Turkish land forces command, Turkey decided to obtain few M-270 systems directly from the United States. 12 M-270 launchers and more than 2,000 M-26 227 mm rockets were purchased with deliveries being completed in mid-1992. Due to improvement of in-house capabilities achieved by Turkish companies in area of artillery rocket systems Turkish land forces command decided not to go ahead with the second order of 24 additional M-270 MLRS with MGM-140 ATACMS (Army Tactical Missile System) tactical ballistic missile systems..

Several countries were approached including France, Israel and China regarding rocket and missile technology transfer, joint development and co-production proposals. Chinese offer was considered the best one in terms of both financial and technological issues. As a result, agreement was signed with CPMIEC (Chinese Precision Machinery Import and Export Company) far the joint development and manufacture of WS-1(Wei Shi; Guardian) in 1997 under Kasirga (Hurricane) project.

First test lauches of prototype T-300 missiles are performed in 2000 in Turkey.

300 mm Multi Barrel Rocket Launcher (MBRL) is a tactical weapon system used in artillery units which fulfills its fire support mission by indirect/blind firing against area targets, during day and night and in all weather conditions. It is capable of firing the 4 rockets it is carrying in single firing mode or in ripple. Long range 300 mm rockets manufactured by Roketsan with High Explosive with steel ball warhead creates effective lethality on area targets at 100 km. ranges without drag ring, up to 120km…

The Launching Vehicle, which is controlled by the Command Vehicle and logistically supported by the Transport and Load Vehicle has the necessary equipment to operate by itself whenever necessary.

First test lauches of prototype T-300 missiles are performed in 2000 in Turkey.

Typical Kasirga battery is composed of a Command and Control Vehicle, 6-9 launcher vehicles (F-302T) and 6-9 resupply and reloading vehicles, all based on German MAN (6×6) 26.372 10t cross-country truck chassis. Each launcher vehicle has four cylindrical tubes for the TR-300 rocket. Each 302 mm rocket is 4.7 meters in length, weighs approx. 524 kg and is provided with 150kg of cluster munitions to take out a variety of targets such as fortifications, infrastructures, armored vehicles, etc. A single artillery system can get ready-to-fire within 20 minutes. TR-300 rocket has four fixed fins and reaches a maximum flight altitude of 30,000m with a maximum speed of Mach 4.2. Maximum range is quoted as 80-100km with a minimum range of 20 to 30km. The rockets use a composite solid propellant system (HTPB) and are usually fitted with a Blast Fragmentation warhead consisting of 26,000 steel balls.

«Kasirga» T-300 MBRL is a 300 mm, Multi Barrel Rocket Launcher System fitted with the latest sub-systems, which are capable of effectively firing at critical targets, 100+ km in depth.  Included in TSK inventories. Turkish land forces command has a total of 6 batteries of T-300 Kasirga system in service. The T-300 system and TR-300 is being promoted by ROKETSAN in various international defense exhibitions and offered for export. Given the successful export of TR-122 Sakarya MBRLS series along with 10,000 TRB-122, United Arab Emirates may become first export customer of T-300 Kasirga. ROKETSAN is conducting development work on TR-300 to improve the characteristics of the rocket can be considered as a high possibility given the company’s knowledge of composite propellants and advanced production methods. 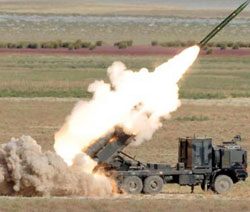 T – 300, the 300 mm Multi Barrel Rocket Launcher Weapon System is a tactical weapon system which, in artillery units, functions as in – depth fire support, day and night and in all weather conditions, by opening indirect fire at sectoral targets.

T – 300, which can be directed from the command vehicle and can be supplied with munitions by a transport and loading vehicle, is equipped to undertake fire missions independently if required.  According to the logistics infrastructure and the needs of the user, alternative versions of it can also be designed with communication systems, power supplies, navigation systems etc. in different makes and models, including the vehicle.