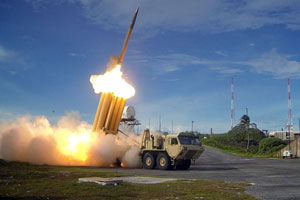 A possible deployment of the Army’s Terminal High Altitude Area Defense System to South Korea is still being discussed, but the service is also looking at possibly sending THAAD batteries to the European and Central Command areas of operations (www.defensenews.com).

China’s ambassador to South Korea warned that the planned deployment of a US missile defense system in the country could damage Beijing-Seoul ties, possibly irreparably. Once damaged, it would be “hard” to normalize relations between the two former Cold War enemies, Ambassador Qiu Guohong said, according to a spokesman for South Korea’s main opposition Minju party.

“There’s a requirement coming out of EUCOM and also out of CENTCOM and so what we are looking at right now is how do we ensure that we meet the regional missile defense requirements, but at the same time retain flexibility to respond to the unknown,” Lt. Gen. David Mann told a group of reporters at the Pentagon Tuesday.

And following North Korea’s recent missile testing and launching a payload into orbit, South Korea and the US have begun to discuss more seriously the possibility of deploying a THAAD battery to the North Korean border, Mann said. 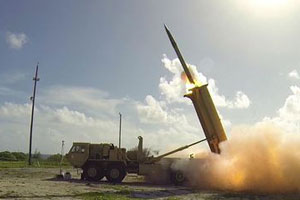 No decision has been made yet due to several complicating factors including China’s opposition to a THAAD deployment in South Korea. “This is a very sensitive issue for the partners throughout the region,” Mann said, “especially when you look at South Korea, one of the largest trading partners, China, in the region, and so we don’t minimize the sensitivity of these discussions,” Mann said.

The three-star added that while the South Koreans and the US are “entering into discussion to really look at the feasibility, no decision has been made on deploying the system.”

The Army will have five operational THAAD units by the end of the year, Mann noted, as demand signals for the capability grow across multiple regions. The Army still has a requirement for nine batteries but has only funded seven THAAD batteries in the five-year defense plan.

Mann added that employing THAAD to a specific location requires some preparation such as leveling the ground and ensuring the safety of operators from things like radiation, so deploying a battery takes longer than its lower-tier missile defense counterpart, the Patriot air-and-missile defense system.

One THAAD battery has been deployed in Guam for several years to protect US forces and allies in response to North Korean aggression. That battery appears to be there for the long haul.

THAAD “would obviously be a huge increase in capability, really proving more of a layered missile defense there on the peninsula,” Mann said, adding, “it’s very, very important that we clarify that that radar, that system, is not looking at China. That system is oriented, if the decision is made to deploy it, that system would be oriented on North Korea.”

Japan is also said to be interested in the THAAD capability, but Mann said he would not speculate on the country’s desires for additional missile defense capability. The US has already deployed two AN/TPY-2 radars to Japan.