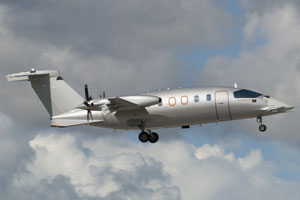 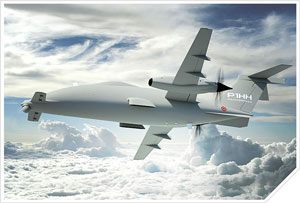 The aircraft will be equipped with EO/IR (Electro-Optical Infra-Red) cameras, radar and communications systems, adding that the contract also covers logistic support and training.

The contract has been signed with Abu Dhabi Autonomous Systems Investments (ADASI).

Last year Piaggio said the Italian Air Force, which has been closely involved in the development of the UAV, would be the launch-customer of the Hammerhead, with deliveries to start this year.

The Hammerhead is an unmanned version of Piaggio’s P.180 business jet.

The Piaggio Aerospace P.1HH HammerHead is a new, state-of-the-art Unmanned Aerial System (UAS) designed for Intelligence, Surveillance and Reconnaissance (ISR) missions whose combination of performance and operational characteristics is at the very top end of the UAS MALE category.

P.1HH HammerHead, is suited for a wide range of ISR, Defense and Security missions, and defines an unsurpassed mission role flexibility and sets a new frontier of CONcept of OPerationS (CONOPS) for Defense. The P.1HH HammerHead Unmanned Aerial Vehicle (UAV) is derived from the successful Piaggio Aerospace P.180 Avanti II business aviation aircraft, the fastest twin turboprop aircraft in the world with a proven, uneventful, service record of more than 20 years and 800.000 flight hours.

The design of the P.1HH HammerHead aims at being a unique ISR platform, able to climb up to 45.000 feet, loitering quietly at low speed (135 KTAS) for an endurance of up to 16 flight hours and dashing at very high speed (up to 395 KTAS) to target. Its capabilities include being able to host several payload combinations and to perform multiple missions: aerial, land, coastal, maritime and offshore security, COMINT/ELINT, electronic warfare as well as other roles.

Based on the P.180 Avanti II proven architecture and technologies (tested and certified for passenger transportation) and, on the outstanding experience and capability of Selex ES in the mission management systems for manned/unmanned ISR, P.1HH HammerHead is designed to be an all weather aircraft with twin turboprop propulsion providing maximum safety, operational reliability and the lowest incident rate in its category.

The P.1HH HammerHead design is fully compliant with STANAG USAR 4671 standards to fly in both restricted and unrestricted flight areas, according to the relevant authorities permission.

This is very versatile thanks to its unique patented 3 lifting surfaces configuration (3 LSC) and high aspect ratio laminar wings, adapted for the P.1HH design by moderately increasing the wing span to sustain larger vehicle masses and allocating a quick detachable joint to the outer wings for rapid aerial deployment of the UAS in remote areas. Being based on a certified Mach 0.70 aircraft, P.1HH HammerHead is the fastest MALE.

The P.1HH HammerHead power plant has two, highly reliable Pratt & Whitney Canada PT6A-66B turbine engines integrated with low noise 5 blade scimitar propellers. The Power Plant is controlled by two Engine Interface Units that receive commands from the FCC to drive the turbine and the propeller governors while managing engine and propeller data. A large upper fuselage tank, supported by a robust yet efficient carry through beam, is integrated to provide the required fuel quantity for long range and endurance.

A smart fuel system is designed to control and minimize the movement of the aircraft center of gravity for maximum operational flexibility in a wide range of mission payloads. The triple redundant 28VDC electrical generation and distribution system supplies energy for all aircraft functions with adequate operational reserve through the envelope, and fully satisfies large power demands from a variety of power consuming payloads. P.1HH HammerHead inherits proven Piaggio Aerospace P.180 aircraft general systems, e.g.: Anti Ice, with hot air on main wing, electrical on forward wing and pneumatic boots on the engine nacelle inlet. It also has a hydraulic dual pressure system for landing gear extensions/retraction and brake activation, plus other ancillary systems like fire extinguishing for the engine nacelle area. These subsystems are all commanded by the VCMS, via fail-safe Remote Interface Units.

The large but, low drag P.180 aircraft fuselage provides capability for aerodynamically effective payload arrangements, with plenty of available volume from the variety of LRU’s equipment, sensors and communication equipment comfortably located inside the fuselage.

All VCMS LRU’s are installed inside the large volume fuselage, in a very protected optimized operative environment, in a specific lay-out that provides zonal separation and temperature analysis to achieve a state of the art operative temperature range, highest VCMS reliability and finally, P.1HH HammerHead safety. Very easy access is provided through the large entry door and a multitude of access doors for the best maintainability within the segment.

An advanced Ground Control Station (GCS) is the P.1HH HammerHead UAS’s command & control center. The GCS is located in an autonomous shelter that hosts crew, equipment and consoles necessary to manage three UAVs (two operational, one in transfer mode) and their related Payloads.

The Crew processes functions necessary to execute tactical unmanned missions and stand-off surveillance unmanned missions, remotely commanding and controlling through VCMS and MMS the on-board surveillance system with an advanced human/machine interface integrating display and control system. The GCS is provided with multip le Ground Data Terminals (GDT) that when coupled with the associated Air Data Terminals (ADT) on the vehicles provide Line Of Sight (LOS) and Beyond Line Of Sight (BLOS) Link for Vehicle and Payload Control.

Mission data is eventually relayed to the headquarters either via ground communication systems or eventually with the same LOS/BLOS data link.

VCMS / GCS is developed and supplied by Selex ES thanks to their long experience in Avionics for many different platforms and Unmanned Aerial System.

The P.1HH HammerHead UAS Mission Management System is based on Selex ES skyISTAR® innovative technology, which redefines the concept of patrolling and ISR missions, to encompass threats that range from terrorist attacks to illegal immigration, as well as protection of Exclusive Economic Zones (EEZ), infrastructures and critical sites.

The on board airborne Mission Management System (MMS) manages sensors, video and data, communications, and ISR functions and it is capable of recording video and mission data.

Unpaired combination of performances for range and operational speed: