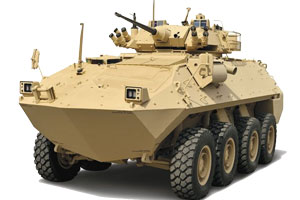 The Army is looking beyond carrying out an urgent request to equip Stryker units in Europe with a medium-caliber cannon by scouring industry for capability upgrades, the Stryker Brigade Combat Team program manager said. The deadline to respond to the solicitation is April 1 .

The service released a market survey Tuesday “intended to reach out to industry and involve them in the dialogue,” Col. Glenn Dean told a few reporters in an interview Monday. “What capabilities should we be considering beyond the things that were already sort of on our menu”.

The Army will look at different sensors, better ways to integrate capabilities and ways to make vehicles more survivable beyond its efforts to upgrade flat-bottom Strykers with a Double-V Hull (DVH) and adding a 30mm cannon to flat-bottom vehicles in Europe.

Adding the 30mm cannon to some Strykers and the Javelin anti-tank missile to others is “at the top of the list,” Dean said. “I am pretty confident in saying that no matter what plan we come up with those are going to be part of it.”

The market survey is really intended to look at mission equipment packages on each of the individual platforms, but will not go beyond the set Stryker requirements, he added.

In the near-term, the Army approved the upgrade for 81 vehicles in July 2015 in response to urgent requests from the Germany-based 2nd Cavalry Regiment to replace its .50-caliber machine guns with a 30mm gun and turret amid fears the eight-wheel vehicles were being outgunned by their Russian counterparts. The plan is to start fielding the new vehicles in fiscal 2018.

Test firings of a 30 mm cannon in the Kongsberg MCRWS occurred on a Stryker demonstrator vehicle on 19 February 2014. The cannon showed increased lethality and accuracy over the standard .50-caliber machine gun at ranges from 600-1,550 meters, with four rounds from five-round bursts hitting the targets. Up-gunning Stryker vehicles is expected to give infantrymen greater fire superiority to end firefights quicker. The 30 mm cannon is capable of hitting targets at a range of over 2,000 meters (1.2 mi). Army leaders were impressed with the demonstration and are looking to advance the proposal and add the system onto vehicles in service.

The initial tranche of funding from Congress — $9.8 million — arrived in September, allowing the Army to start early design work and pay for a competition, led by Stryker’s prime contractor General Dynamics Land Systems, to select a gun and turret. GDLS received $8 million of that to conduct the competition.

More funding — $75 million — which arrived in January, will take the program through designing and building a prototype, according to Dean.

A little more than $300 million is allocated for the eight prototypes and upgrades to 83 production vehicles, plus spares, Dean said.

This week the Army is conducting the preliminary design review for the integrated systems, such as modifications to the hull, to be able to accept the turret and cannon, he said.

Next up, in April, the service will begin buying components that take longer to produce for production vehicles. By December, the Army expects to take delivery of its first prototype, which will then go through an abbreviated test period next spring before giving the final green light on the production phase of the program, Dean said. And by the end of next year, the service will take delivery of the first production vehicle.

An operational test is planned in early fiscal 2018 as the Army begins building the full production lot, according to Dean.

The Army has worked out a robust and fast-paced test schedule that leverages some previous work done under the defunct Future Combat Systems program, the Marine Expeditionary Fighting Vehicle program and the Navy’s amphibious transport dock (LPD 17).

The service is also involving the 2nd Cavalry, who will receive the up-gunned Strykers in Europe, in the design reviews and the testing process, which is “unique,” Dean said.

The Stryker Family and LAV Family of vehicles combine versatility, survivability, lethality and maneuverability to handle a wide array of missions. Introduced in 2000, the eight-wheeled, medium-weight Stryker provides versatility, survivability, lethality and maneuverability. The Stryker Double-V Hull is known as the gold standard of protection. And with more than 10,000 LAV’s delivered around the world, we offer the most advanced technologies combined with combat-proven survivability.

The Stryker is an eight-wheeled, armored combat vehicle that provides an effective mix of capabilities which enables Soldiers to successfully execute their missions across the full spectrum of operations. Manufactured by General Dynamics Land Systems, the Stryker is survivable, agile, maneuverable and capable of safely transporting Soldiers to their objective on the battlefield. All ten Stryker variants combine maximum commonality and proven performance with low-operating and life-cycle costs. America’s Soldiers deserve nothing less.

General Dynamics Land Systems (GDLS) and E. Falck Schmidt (EFS) have joined together to produce a remotely-controlled Anti-Tank Guided Missile (ATGM) system for tracked and wheeled Infantry Armored Vehicles. Evolved from the Elevated TOW System (ETS), the ATGM Weapon System provides TOW missile capability to today’s Infantry Armored Vehicles. The ATGM weapon system has a 2-tube launcher and elevated mast extending 0.5 meters above the chassis. The ATGM provides maximum armor protection to a crew of three while operating stealthily using terrian and other structures to provide masking and protection. The ATGM weapon system, through the employment of current sighting technologies, enables the use of all TOW missile types. With ATGM, customers are assured of the equipment and missile commonality with current U.S. and Allied Inventories. The ATGM weapon system is employed in the U.S. Army Stryker Brigade Combat Team (BCT) ATGM vehicle.

Stryker Infantry Carrier Vehicle (ICV) provides the protected transport of a nine-man Infantry squad and a two-man crew to objectives on the battlefield. The mounted Remote Weapon Station provides direct fire support to dismounted Infantrymen during assults. As the most common variant within the Stryker Combat Team, the ICV is responsible for the movement of maneuver elements across the area of operaions. The ICV is also capable of integrating a variety of survivability kits, making it one of the most versatile and safest personnel carriere in the Army’s inventory.

The Stryker Double-V Hull (DVH) is an evolutionary leap of improved capability across the Stryker family of vehicles. The Stryker Infantry Carrier Vehicle (ICV) Double-V Hull provides greatly improved survivability to the Stryker Brigade Combat Team. The new, combat-proven, Double-V Hull configuration provides unprecedented survivability against mines and IEDs, while the new driveline and suspension significantly improve the vehicle’s payload capacity, ride stability, and reliability. As the most common variant within the Stryker Brigade Combat Team, the ICV maneuvers combat elements across the area of operations. The mounted Remote Weapons Station provides direct fire support to dismounted Infantrymen during assaults. The new Double-V Hull ICV is one of the most versatile, mobile, and safest personnel carriers in the Army’s inventory. Already saving lives in the SBCT, and ready now to be the AMPV solution, the Double-V Hull is in production for several of the Stryker variants.