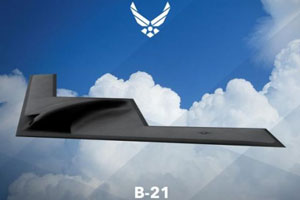 The US Air Force secretary unveiled the first official rendering of the new Long Range Strike Bomber and revealed its official designation: the B-21 (http://www.defensenews.com).

In a speech at the Air Force Association’s Air Warfare Symposium on Feb. 26, Secretary Deborah Lee James shared an artist’s concept design of the next-generation bomber, which will be built by Northrop Grumman. She also announced the plane’s long-awaited designation, calling it the B-21.

However, the Air Force still has not decided on a name for the new B-21, James said. She called on airmen to send in suggestions.

«So we have an image, we have a designation, but what we don’t yet have, we don’t yet have a name,» James said, «and this is where I’m challenging and I’m calling on every airman today … to give us your best suggestions for a name for the B-21, America’s newest bomber.»

While there are no existing prototypes of the aircraft, the artist rendering unveiled Feb. 26 is based on the initial design concept, according to an Air Force statement. The Air Force settled on the B-21 designation as recognition that LRS-B is the first bomber of the 21st century, the statement noted.

James also explained in the statement why the B-21 shares a resemblance to the B-2, also built by Northrop.

“The B-21 has been designed from the beginning based on a set of requirements that allows the use of existing and mature technology,” James said, according to the statement.

The Air Force awarded the contract for B-21 engineering, manufacturing and development to Northrop on Oct. 27. The service plans to field the new bomber in the mid-2020s.

The Air Force has named the seven major contractors who will join Northrop Grumman in building the next-generation B-21 bomber, including the new plane’s engine-maker Pratt & Whitney. The other six industry partners named March 7 will work on “airframe or mission systems” for the new plane. These contractors are:

For comparison, perspective aviation complex of distant aircraft (PAK DA, factory designation: «product 80») — the Russian strategic bomber of new generation developed by the JSC Tupolev company according to the statement of the developer, is not development or modernization of already existing aircraft, and represents essentially new aircraft. On request of the customer the plane has to be capable to apply all existing and perspective types of weapon, to be equipped with the latest communication systems and electronic warfare system, and also to possess a small visibility. Works on study of the concept began in 2009, the first flight it is supposed to carry out in 2019, acceptance on arms — by 2025. In the future PAK DA has to replace the strategic planes of Tu-95 and Tu-160 which are adopted the Russian Air Force, and partially to assume the Tu-22М3 functions.